Revolutionizing the Age of the Indian Acheulean

The oldest Acheulean artefacts outside of Africa have now been dated to 1.5 million years ago by Shanti Pappu and her team of French and Indian colleagues, as reported in Science. This is rather spectacular and welcome news for our understanding of Out of Africa dispersals. If true, the new evidence from the site of Attirampakkam means that early human populations from Africa were able to reach the subcontinent not long after handaxe and cleaver technology was invented in Africa. These early hominins would have had to pass through some formidable landscapes to reach southern India, skirting around significant geographic barriers such as mountainous terrain and sizeable river valleys. If the dating is upheld, the implication is that ancestors, such as Homo erectus, reached India at an early stage.

Almost at the same time of this publication, our team has just published an 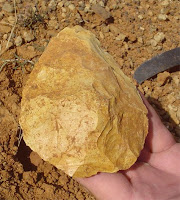 on-line article in Quaternary Research which indicates that the Indian Late Acheulean is as young as 140,000 - 120,000 years old. The Son Valley sites of northern India are now among the youngest known Acheulean sites in the world. Based on the Narmada fossil, we opine that these Late Acheulean industries were probably made by an archaic, but somewhat bigger brained ancestor, such as Homo heidelbergensis.

Current research in India therefore indicates that the Acheulean industry ranges from 1.5 million years ago to 120,000 years -- a period spanning well over 1.4 million years of hominin evolution! Systematic excavations and rigourous dating methods have finally allowed us to better understand the population history of the subcontinent. Though direct fossil associations with tools remain elusive, the current evidence does suggest that more than one ancestor made the handaxe and cleaver industries. Does this mean that there was more than one dispersal into the subcontinent, or does it mean that there was a regional speciation event? Though the Acheulean toolkits obviously served useful purposes for a period extending more than a million years, the long-term stylistic consistency of the tool industry is rather remarkable, indicating that the pace of technological innovations was unlike anything that we see in the modern world.
Posted by Michael Petraglia at 21:51