Ethnoornithology on the Kenya coast 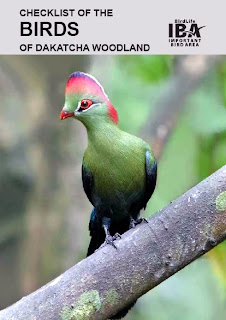 Last year (2009) Nature Kenya / the East Africa Natural History Society (EANHS) published its Checklist of the Birds of Dakatcha Woodland, an Important Bird Area (IBA) in the hinterland of Malindi on the Kenya coast. The woodland is home to a number of globally threatened and near-threatened bird species and is itself threatened by illegal commercial agricultural development. One of the birds under threat graces the checklist’s cover: the beautiful Fischer’s Turaco (Tauraco fischeri), known as kulukulu in the Giriama (= Giryama) language. This is the first checklist of its kind in Kenya to include the vernacular names of birds recorded and cross-checked by local community members, and is an important addition to the ethnoornithology of the wider region.

Giriama is one of the Mijikenda idioms and is closely related to Comorian, Swahili, and other Sabaki Bantu languages. Cognate bird names can therefore be found in the Comoros as well on many of the islands off the East African coast from Somalia in the north to Mozambique in the south. Tracking the linguistic history and geography of these and other animal names can provide important information about people's migrations and interactions in the past (cf. my 'Island Subsistence: Hunting, Trapping and the Translocation of Wildlife in the Western Indian Ocean'). Bird names are particularly useful in this regard because we have better information about avian distributions and environmental preferences than we do for many other groups of animals.

(For more on the Dakatcha checklist and other aspects of Mijikenda ethnoornithology see the original post on 'Giriama Bird Names', and an earlier one on 'Birds of Omen and Little Flying Animals with Wings', at my East African Notes and Records blog.)
Posted by Martin Walsh at 09:06 1 comment:

As we all know Madagascar was settled by westward journeys of Austronesians, probably towards the middle of the First Millennium AD. Not surprisingly they brought rice, presumably tropical japonica from Indonesia. Interestingly, indica rice are also widely cultivated in Madgascar today. As summarized, albeit briefly, in a new article by Purugganan (The evolution of rice: molecular vignettes on its origins and spread), these japonica and indica groups are well-differentiated genetically from each other, and can be suggested to represent two waves of introduction with two separate bottlenecks. But they have also hybridized, and unique landrace races, especially from the highlands of Madagascar, appear to be of local hybrid origin. This highlights the importance of multiple episodes of plant translocation across the Indian ocean, and the, perhaps rare but highly significant, role of hybridization events in the local adaptation of crops such as rice. We look forward to the publication of further details of the Malagasy rice genetic research from NYU.


This article has now been finally published and paginated as part of a special issue on rice.
Posted by DQ Fuller at 10:44 2 comments:

As evidence that Indian Ocean connections, and their role in crop dispersal, have been gaining increased attention, I would like to draw attention, somewhat belatedly, to two journal special issues of last year that may be of interest. At the very end of 2009 a special issue of the French periodical Etudes Ocean Indien (Vol. 42-43) devoted to plants and people was published. Articles are in either in English and French. Of particular interest personally, were papers by Lefevre on the indigenous classification of plants in part of Madagascar, the 'folk models' by which rice is understood in Madagascar explored by Hume, the use of wild plant foods and famine food on Zanzibar (by Martin Walsh), and a study of that interesting stimulant kat, chewed in Ethiopia and Yemen (by Carrier & Gezon); there is also a SEALINKS paper I wrote with Nicky Boivin on the crops, cattle, commensal small mammals and weeds [pdf] that have moved back and forth between India and East Africa in the past.
Slightly older, was a special issue of journal Ethnobotanical Research and Applications, devoted to bananas. While many paper focus on bananas in Asia, several touch on the movement of bananas between Asia and Africa, especially papers by Blench, and Hlidebrandt & Neumann; important paper of a more archaeobotanical/methodological slant are papers on phytoliths and banana seeds by Vrydaghs et al. and De Lange. The papers are all in the middle of the 2009 volume, starting from page 169. A full list of banana papers was posted previously on the archaeobotanist blog.
Posted by DQ Fuller at 10:41 2 comments: The Arabian peninsula is in a critical geographical position for understanding human movements out of Africa, as exemplified in a number of papers in a book co-edited by Petraglia and Rose, “The Evolution of Human Populations in Arabia” (Springer, 2009). While some inroads have been made to understand the dispersal of modern humans and our archaic ancestors, relatively little interdisciplinary and long-term fieldwork has been conducted to tackle this problem. Our team aims to change this situation -- thanks to a new 5 year agreement with the Saudi Commission for Tourism & Antiquities and in partnership with Dr. Abdullah Alsharekh of .


In March of this year a small team of interdisciplinary specialists conducted a pilot study in the palaeolake region of the in northern . We concentrated our fieldwork in the Jubbah basin, since this area was known to contain a palaeolake, Palaeolithic and Neolithic sites, and an extraordinary amount of rock art. We were not disappointed in our choice of our survey area, since a few intensive days of work showed that the region contained a wealth of lakeside sites and rockshelters with artefactual material. We plan on conducting long-term field work in Jubbah to understand how humans adapted to changing environments over the last 125,000 years. We also plan on conducting field work on older Acheulean sites (with characteristic large stone tool forms known as handaxes and cleavers), which probably relate to much earlier exits of closely related ancestors, such as Homo erectus and Homo heidelbergensis.


The joint fieldwork programme is part of a 5 year agreement between the Saudi Commission for Tourism & Antiquities and the of , . Our initial fieldwork has been supported by a grant to Richard ‘Bert’ Roberts, “Monsoons and Migrations”, Australian Research Council.

Posted by Michael Petraglia at 22:17 No comments:

http://www.dlist-asclme.org/group/coral-reefs-and-global-change
Posted by Jens Zinke at 16:04 No comments:

A new WIOMSA MAMSA project has been funded: Coral reefs and global change – a historical perspective spanning the western Indian Ocean (MASMA/CC/2010/02 project). This project will run from 1/5/2010 until 30/4/2012.
Below is a brief summary of planned research, anyone wanting further information should please contact:jens.zinke@nioz.nl or chris.reason@uct.ac.za
Project Summary:
This study proposes to examine the spatial and temporal environmental changes affecting coral reef ecosystems in the Western Indian Ocean. In this multi-disciplinary project, environmental geochemists dealing with the direct data acquisition on biological archives (corals), will work in partnership with climate scientists, environmental modellers and ecologists. This will allow direct comparison of the geochemical data obtained by the geochemist with models of river discharge and pollution and ecological changes. Integration of these data should provide a far better understanding of the entire ecosystem in the region investigated and lead to improved sustainable management of the coastal environment .The project is divided into two interdependent sub-projects:
1) a coral proxy-climate-based, and
2) a model-ecology-based project.
As part of sub-project 1, we will drill coral cores to reconstruct environmental changes in various reef complexes across the tropical Indian Ocean (Mauritius, Madagascar, Tanzania, Kenya) in relation to natural climate change and anthropogenic influences.
The major objective of sub-project 2 will be the quantification of land use and hydrological change in tropical catchments over decadal to century scales, and to determine the relative importance of anthropogenic versus climate forcing. These data will provide the link between land use changes, river runoff, sediment compositions and the coral proxy records that are required to distinguish the relative roles of natural and anthropogenic induced changes in the coral reefs. Finally, we will link the results of subproject 1 and 2 to long-term ecological reef monitoring programmes of our partner institutions to infer the impact on temporal and spatial biodiversity changes in coral reef ecosystems across the western Indian Ocean.
The results of this project will provide a broader management context and to allow conservation scientists to identify environments where corals are expected to survive climate change and insure that management and conservation actions are focused on these key areas.
Posted by Jens Zinke at 16:03 1 comment: 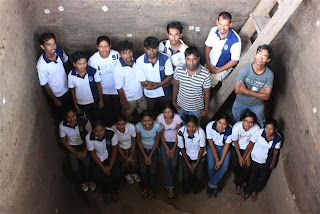 A new collaboration between a consortium of and Sri Lankan institutions has been initiated to study early maritime subsistence and trade in . The collaboration brings together researchers and students from the universities of , UCL, and Ruhuna with the Post-Graduate Institute of Archaeological Research and the Sri Lankan Department of Archaeology. A first fieldwork season was recently conducted, investigating coastal midden and port sites, as well as inland shelters. The project aims to better understand the emergence of coastal communities, regional trade and long-distance contacts, though the application of a suite of new techniques to the extraordinary but still poorly known Sri Lankan record. Preliminary results are providing insights into the spread of crops and commensal species, as well as ’s role in the spice trade.
The project is being undertaken as part of the Oxford-based Sealinks Project and the UCL-based Early Rice Project. Students from the participated in an associated field school.
Posted by Nicole Boivin at 21:12 2 comments:

Our team has recently written the article, "Out of Africa: new hypotheses and evidence for the dispersal of Homo sapiens along the Indian Ocean rim", published by the Annals of Human Biology. We argue that modern humans were present in Arabia and South Asia earlier than currently believed, and probably coincident with the presence of Homo sapiens in the Levant between ca 130 and 70,000 years ago. We go on to argue that climatic and environmental fluctuations during the last 125,000 years would have had significant demographic effects on Arabian and South Asian populations, though indigenous populations would have responded in different ways. Based on a review of the current genetic, archaeological and environmental data, we indicate that demographic patterns in Arabia and South Asia suggest an early dispersal. This new hypothesis, based on new evidence, contrasts with the consensus view of Indian Ocean movements, which contends that modern humans moved out of Africa 60,000 years ago, rapidly moving along the coast to eventually reach Australasia. This new model has obvious implications about the unfolding of the later demographic history of human populations in Eurasia.
Posted by Michael Petraglia at 12:19 2 comments: