Goodbye to a pioneer and polymath 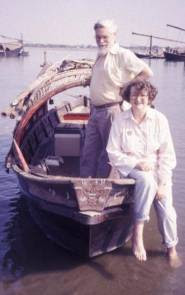 We note sadly the passing of Dr. Raymond Allchin, who died on 4th June 2010 at the age of 86. Raymond, together with his wife Dr. Bridget Allchin, was a major figure in South Asian archaeology for a half a century. He travelled widely in the Indian subcontinent, exploring, surveying and excavating sites that would become classic type sites, particularly for the south Indian Neolithic, and both together with Bridget and alone, writing major works on Indian culture and archaeology. Raymond’s knowledge of the Indian subcontinent was remarkably broad as well as deep, and reflected a profound passion for the region and its people. He wrote and taught about archaeology, history, art, linguistics, poetry, place-names, and ethnography, leaving a corpus of literature that has stood the test of time. Raymond leaves as a legacy such major institutions as the Ancient India and Iran Trust, of which he was a Founding Trustee, and the European Association of South Asian Archaeologists, of which he was a founding member.

Raymond helped to educate and inspire numerous generations of South Asian archaeologists, including my own. I knew him only late in his career, after his retirement from the , but was nonetheless struck by his intelligence and warmth. While I lived in , our families met occasionally for tea or dinner, and I remember his lively and often humorous stories with great fondness. Also memorable was the grace that he sang at my wedding to a fellow South Asian archaeologist – in Sanskrit and, naturally, without notes. I feel fortunate and grateful to have known Raymond. In his later years he worked closely with Bridget on an autobiography covering some of the early years of their travels in the subcontinent, and I hope we will see published soon the memories of their extraordinary life together.
Obituary in the Times:
http://www.timesonline.co.uk/tol/comment/obituaries/article7146240.ece
Times Higher Education Supplement:
http://www.timeshighereducation.co.uk/story.asp?sectioncode=26&storycode=412253&c=1
The Hindu:
http://www.hindu.com/2010/06/24/stories/2010062456432400.htm
Society of Antiquaries of :
http://www.sal.org.uk/obituaries/raymondallchin
Allchin Memorial lecture delivered in Kerala:
http://www.thehindu.com/todays-paper/tp-national/tp-kerala/article513228.ece
Posted by Nicole Boivin at 22:26 3 comments: