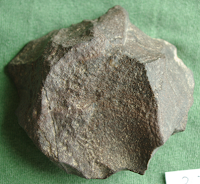 A research team reports new findings of stone age tools that suggest humans came "out of Africa" by land earlier than has been thought.

Click here for the BBC story.
Posted by Michael Petraglia at 07:50 4 comments:

Palaeo-3 is the latest forum for a debate on the Toba volcanic super-eruption of 74,000 years ago and its role in shaping terrestrial environments and evolutionary events. The most recent debate stems from an article published by Martin Williams and his team which contends that the Toba eruption was followed by climatic cooling and the deforestation of India (see also press release by co-author Stan Ambrose, and sensational media attention). The researchers base this claim on study of carbon isotopes from ash profiles in the Son and Narmada River Valleys in India and pollen from a marine core in the Bay of Bengal. The team of earth scientists and archaeologists argued that Toba led to major and prolonged alterations in ecological settings in India, such as the replacement of forests by grasslands and woodlands. The investigators reasoned that these dramatic landscape alterations would have taken a heavy toll on tropical ecosystems and even the survival of certain mammals and humans in India and elsewhere, as supposedly demonstrated by genetic bottleneck data in a number of species. In their article, they say, "Our results demonstrate that the Toba eruption caused climatic cooling and prolonged deforestation in South Asia, and challenge claims of minimal impact on tropical ecosystems and human populations" (emphasis ours).

Though we are keen to learn more about the effects of the Toba super-eruption on ecosystems, especially given the paucity of such studies in India, we make the case that Martin Williams and his team have overstated their evidence. In a Palaeo-3 comment by Michael Haslam and myself, we assert that the new study provides no compelling evidence that clearly and convincingly links Toba to major and catastrophic impacts on ecological settings in India. For starters, as revealed by the illustration provided in Haslam and Petraglia (above), we point out that climatic cooling was well underway before the volcano exploded, thereby questioning the cause and effect relationship between Toba and environmental deterioration. Moreover, we argue that the so-called forest to grassland transition may be the consequence of natural changes in climatic regimes or even to other local depositional processes, such as the growth of grasses on top of ash. Indeed, we are highly skeptical that all vegetative communities across India responded in the same way after the ash was laid down. Instead, we suggest that a mosaic of ecological conditions existed across the subcontinent after the Toba event. On the basis of the current evidence, we see no reason to accept the claim, as forcefully made by Williams and his colleagues, that Toba altered the course of human and mammalian evolution. And, on this score, it is somewhat surprising to see that Williams and his team admit in a reply that the evidence to demonstrate a causal link between Toba and genetic bottlenecks is tenuous.

The Toba debate will not end here. But, stay tuned for additional publications that will soon appear on Toba and the archaeology of human populations residing along the Indian Ocean rim.
Posted by Michael Petraglia at 10:01 1 comment:

Despite its inaccessibility (it remains untranslated and copies are hard to obtain), Vinigi Grottanelli’s Pescatori dell’Oceano indiano (1955) is generally agreed to be one of the best studies of a rural Swahili-speaking community. It’s our principal ethnographic source on the Bajuni (aka Gunya, aka Tikuu), whose traditional territory comprised a long string of coastal settlements and islands between Kismayu (Somalia) in the north and the Lamu archipelago (Kenya) in the south. And the political turmoil of recent decades in Somalia has turned it into a valuable historical document, a record of a way of life that for thousands of Bajuni has been shattered by persecution and conflict.

The Bajuni minority in Somalia didn’t have a very good time during the regime of Mohamed Siad Barre (1969-91), suffering discrimination and a variety of indignities. From 1974 fishermen had their fishing gear and boats confiscated and were compelled to join government cooperatives, while some were force to move off the Bajuni islands. But matters went from bad to worse following the outbreak of the Somali civil war and the overthrow of Siad Barre in January 1991. Bajuni joined the general exodus of victimised groups from Somalia, and many of them fled to UNHCR refugee camps in and around Mombasa, where the Kwa Jomvu camp became their main home until it was finally closed down in 1998.

Conducting research with Swahili-speaking refugees in Kenya might have been tricky at that time, politically and research-permission-wise at least. The subsequent emigration of large numbers of Bajuni and others to Europe and North America has perhaps made it easier, though a generation has now grown up in a very different linguistic and cultural environment from that of their original homeland. Asylum-seekers’ histories of displacement, including their knowledge of language and place, are of special interest to the immigration authorities processing their claims and the civil society organisations and lawyers defending their rights. Since 2004 linguist Derek Nurse has engaged with numerous cases of refugees claiming to Bajuni from Somalia, and this work has seen him return to research that he began in northern Kenya in 1978 (Nurse 1980).

The academic fruits of this are now online in his Bajuni Database. This comprises a general overview of ‘Bajuni: people, society, geography, history, language’, a Bajuni lexicon, a grammatical sketch (that updates Nurse 1982), and three maps (one of the whole Bajuni coast, plus sketch maps of Chovae and Chula islands). These aren’t polished documents, but are very useful nonetheless. The overview – part of which is a gazetteer of Bajuni villages down to the Kenya border – is of particular interest. Very few Bajuni remain in Somalia, and their world is clearly not what it was in the days before the dictatorship of Siad Barre and the Somali Civil War. Current prospects for research on the south Somali coast and Bajuni islands don’t look good, and recording what we know of this lost world and its former inhabitants is the best we can do. It is also important for the Bajuni diaspora, and a poignant reminder of the widespread suffering that the Somali conflict has caused.

(This is an abridged version of an original post, 'The Lost World of the Bajuni', on the East African Notes and Records blog.)